Here at The Salon Host we find ourselves doing an awful lot of advocating for IRL over digital interaction, but a recent conversation with Posthoc salon regular and Two Bit Circus VRcade co-founder Brent Bushnell has us considering a new perspective. According to Brent, technology, employed consciously and creatively, actually has the ability to enhance in-person social interactions by creating endless possibilities for shared experiences. It’s easy to feel doomed at times about technology evolving so much faster than humans’ ability to use it responsibly (don’t make us give you the stats on screentime post-Covid!), but perhaps the species just needed a few rogue geniuses like Brent and his co-founder CTO Eric Gradman, to take the time to figure out how we can use technology to strengthen social ties simply by having more fun together.

Stepping into Two Bit Circus is like stepping into the mind of a child who grew up to be an engineering genius and somehow also managed to never fully grow up. Walking in the front door puts you between The Midway, a uniquely modern twist on old school carnival games, and the digital gameshow auditorium, where their formerly IRL-only experience went online during Covid. Currently, there’s a monthly game between IRL and URL guests of Two Bit, which you can join on their website.

My first question for Brent, which I already kind of knew the answer to — at least in theory, is what was unique about his childhood that led him to become the guy to help design and build the country’s most sophisticated and delightful modern arcade. “My dad is a big nerd, so he was always dragging us around. We grew up in Silicon Valley in the pre-Dawn of the Internet, so we were going to Fry’s Electronics on Sundays just buying random stuff,” he remembers of his father, Nolan Bushnell, co-founder of Atari and Chuckie Cheese.

“We compromised the phone system in our house in order to play early Apple talk land games. So we were always tinkering, you know term ‘hacker’ used to be associated with malevolent stuff, but it was really meant to describe people who take things apart and put them back together and maybe use them for other methods than their intended purpose. It was just about understanding your environment, and we grew up around a bunch of hacker nerds, which was really special. It seemed like normal life at the time, but looking back it was really unique.” To say the least – Brent, who was born in 1978, remembers his father putting him down in front of the internet for the first time in the early 90’s when there were just 100 or so computers on it.

When asked why he built Two Bit, he says it stemmed from his undying love for live experiences. “My co-founder Eric and I as engineers were seeing all this new tech and asking gosh, how can we play? So that got us going, and it started as small attractions we would bring to people’s parties. And then the attractions got bigger, and the parties got bigger and pretty soon we had our own traveling carnival, and then it went permanent, step by step it got bigger and better and still continues that way.” It’s true, Brent and Eric’s team are constantly working on new experiences, a few of which we got to test and can’t tell you about so you’ll just have to come down to Two Bit’s LA location.

When asked what the optimal relationship is between human social interactions and tech, Brent believes great technology should disappear into the background of any moment. “Rather than us having to conform ourselves to the technology, it should conform to us,” he says. “Interfacing should be conversational, it should be in the way we interface with other humans. Rather than having to learn how to use a keyboard and a mouse those gestures should be natural, the more that you don’t have to change anything to be able to interact with the tech the better.”

From his perspective, there’s a magic that occurs in his immersive group experiences, which by modern definitions could be called “escape rooms,” but to the Two Bit Circus is so much more than that. “Collaboration, relying on people, communication – those can all be really fun and funny group experiences rife with mishap, reality is messy. And that’s awesome. In any given group, someone is going to be the quiet one, someone’s going to be the leader, so creating space to let that emerge and then screwing with it a bit, force the leader to be a different role or the introvert to step up gets people up against our boundaries, gets us learning and inspired and just a little bit outside their comfort zone in a good way.”

That philosophy goes even further for Brent, who believes there’s an essential human need for IRL forums that promote random interactions. “Coming out of Covid, we see how important social interaction is, and how we go nuts when we don’t have it. I love the book Bowling Alone, that book really breaks down how we have fewer and fewer places we interact in public, and fewer and fewer regular institutions that we’re a part of, and that’s not good. When you don’t have random interactions with less prescribed structure, civic engagement craters, you stop caring about your community, you stop caring about your fellow man and that feels really dangerous and toxic at a time when I think we really need to be connected. But it should be natural!” he insists. “Not funneled through 140 characters disembodied across time and space, but live! In-person, face to face.” There’s nothing like Two Bit’s so-called “story rooms,” immersive experience to promote such interactions. If you’re able to get there IRL, you simply must try Dr. Botcher’s 20-minute medical school.

As we struggle with the Delta variant to figure out what a healthy balance is going to be between URL and IRL interactions, there’s a notion that we may have to take it upon ourselves to facilitate the kind of social life that makes us thrive (hence the existence of this website, so get hosting!). “We have to take it upon ourselves to create our own experiences, and just get started immediately in any way you can. My dad used to drill into our heads, he’d say ‘Great idea, what are you gonna do about it today? Don’t worry about making a million dollars, make $1.’ In game-making we always talk about the ‘paper prototype,’ and you might have a plan for a $10million AAA title, great! What does the first screen look like? What’s the tiniest little bite you can take out of this project to give it some reality? The entrepreneur/creator is a doer, the second you get off the couch you learn so much just by experimenting. So I think anyone who wants to do anything needs to get started.”

Are you inspired yet? Then it’s time to host! Your immersive, IRL salon experience is waiting for you and your community to make it real – here’s everything you need to know about hosting a salon to get started. And please check out Two Bit Circus Foundation, which Brent co-founded to offer kids in all economic situations the opportunity to create their own games, experiments and experiences using upcycled materials you can donate here.

The Cards Speak: What It Means To Be A Host 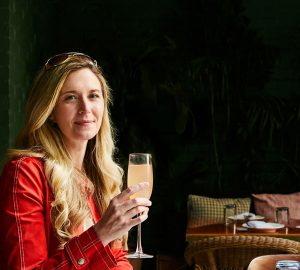